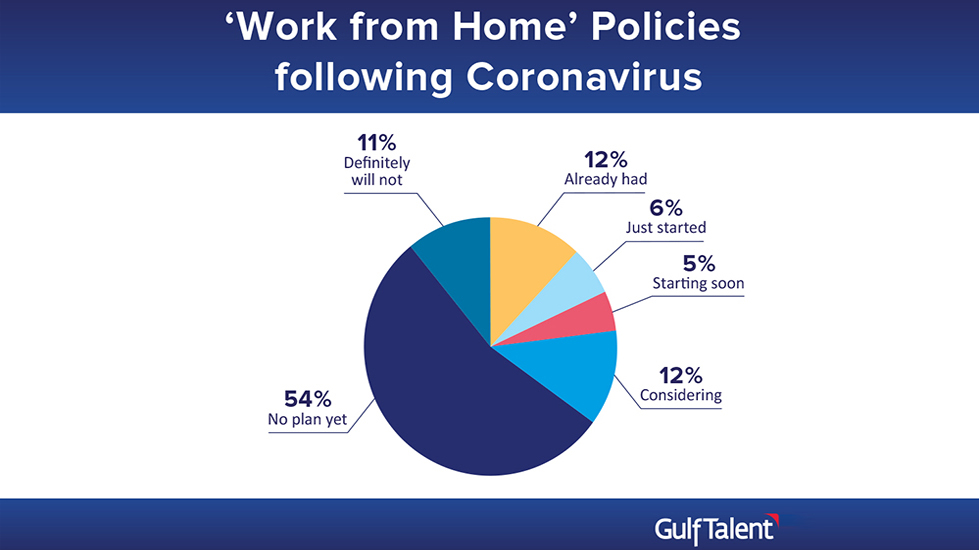 54% respondents have no remote work plans, 14% see no impact of Coronavirus

With the Coronavirus outbreak spreading across the world, one-third of Gulf-based employers are planning to have staff work from home, according to a survey conducted by Middle East employment portal, GulfTalent. The survey received responses from 1,600 company executives, managers and human resource professionals across the six countries of the Gulf Cooperation Council.

Based on the survey results, up to 35% of Gulf-based businesses could soon be asking employees to work from home. This consists of 6% who have just launched work-from-home plans as a result of the recent outbreak, 5% who have confirmed plans being rolled out soon, 12% who are reviewing the concept, combined with a further 12% who already had remote work arrangements prior to the outbreak.

Up to 35% of Gulf-based businesses could soon be asking employees to work from home.

Meanwhile, 54% of survey respondents said they had no remote work plans so far, while 11% said their firms will definitely not entertain the possibility of staff working from home. Across the region, firms in Bahrain reported the highest rate of remote work plans at 38%. This was followed by Qatar, UAE and Kuwait at 37% each. In Saudi Arabia 30% of firms indicated plans for working from home, while businesses in Oman registered the region’s lowest rate of possible remote work at just 18%.

Firms in Bahrain reported the highest rate of remote work plans at 38%. This was followed by Qatar, UAE and Kuwait at 37% each.

Among firms shifting to remote work, 45% plan to do so universally for all employees. The remainder are applying it selectively for certain job categories, with Admin and HR being the most common functions to be moved to home, while Engineering and Operations receive the least share of remote jobs.

With remote work being a new concept for most businesses in the region, the survey found that many were scrambling to get set up technically and organisationally to have staff work from home. By contrast, multinationals surveyed indicated the highest readiness to switch to remote work.

The HR Manager of a multinational company who participated in the survey, said their offices in China and Korea are already closed and staff are working from home. They are monitoring the situation in the Gulf in case the same measures become necessary here.

Some of the executives surveyed speculated that the push to remote work may fundamentally change how regional businesses operate in the long run, with many retaining elements of remote work even after the current business necessity has ended.

Apart from introducing remote work arrangements, many companies surveyed reported a range of other measures to deal with the impact of the outbreak, including restricting business travel, providing health advice to employees and limiting external meetings of staff with clients and suppliers.

Faced with a decline in business resulting from the outbreak, some of the firms reported plans to reduce costs through staff redundancies and unpaid leaves. These were mainly concentrated in the hospitality sector, followed by aviation, logistics and events. A significant 42% of employers surveyed reported no plans or changes of any kind in response to the outbreak.

Impact of outbreak on business

The survey asked managers in which ways their business had been affected by the outbreak. By far the most common impact reported was the difficulty of business travel. Several Gulf countries have imposed restrictions on travel into and within the region.

Companies also reported reduced demand for their products and services, particularly in hospitality, events, education and retail. In an effort to prevent the spread of the virus through large gatherings, governments in several Gulf countries have ordered the cancellation of public events and exhibitions, and closure of nurseries and in some cases even schools.

A further challenge reported by many firms was the difficulty of securing supplies, particularly products and equipment manufactured in China being delayed due to factory closures. Around one-fifth of survey respondents said their company was actively seeking alternative suppliers.

Several respondents reported recruitment from outside their country becoming more challenging, due to flight cancellations, restrictions on entry as well as lock-down in candidates’ home countries. Not all businesses were negatively affected by the outbreak. Some reported a surge in demand for their products and services, particularly those active in healthcare. However, many reported that they were unable to fully serve the demand due to supply constraints and challenges of recruiting from overseas.

Many restaurants and retailers reported a jump in online orders while in-store purchases dropped, as customers chose to stay home and have items delivered to them.