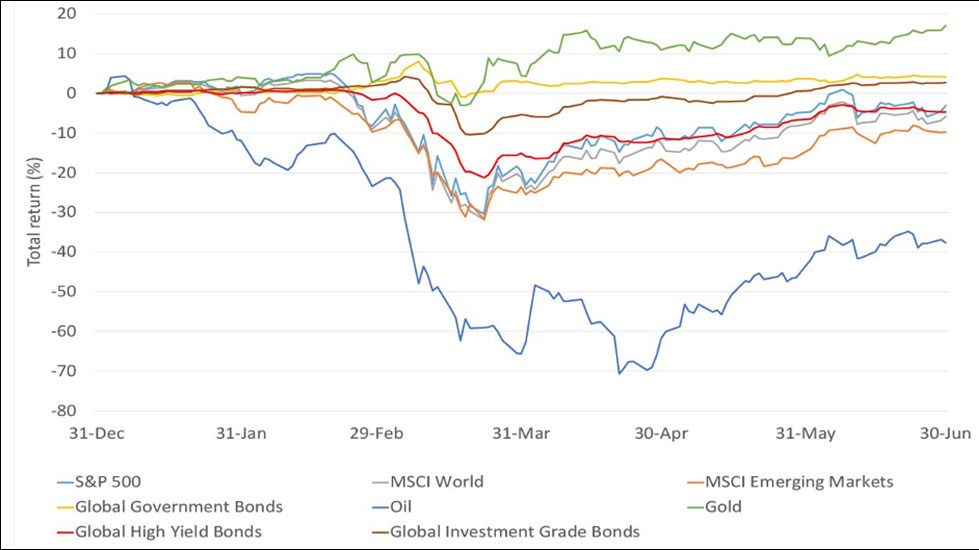 Data gathered by Mondial Dubai, which runs from 31st December 2019 to 30th June 2020, shows total returns in US dollars. Of the asset classes listed, the strongest performing over the year so far has been gold. Heightened uncertainty has served to push down real, after inflation, yields and boosted gold, which has historically been negatively correlated to such a move. The weakest performer was oil, pummelled by the double whammy of demand and supply shocks, the former due to the collapse in demand as large parts of the world entered lockdown and the latter as Saudi Arabia and Russia tensions escalated which saw Saudi Arabia initially flood the market and fears mounted there was nowhere to store oil as demand dried up.

For most asset classes the last six months was a game of two halves: the first up to and including the 23rd March as coronavirus roiled markets and the second after central banks intervened on a massive scale. The first episode saw equity markets suffer their fastest drop in history; the second saw one of the quickest rallies ever, particularly so in the US where Q2 returns were the highest since 1998.

Mondial Dubai expects risk assets, principally equities, to suffer from any realisation that the economic recovery will not materialise as quickly as currently expected

Thinking ahead Mondial Dubai expects risk assets, principally equities, to suffer from any realisation that the economic recovery will not materialise as quickly as currently expected, perhaps following a second wave or as observed through weaker than expected economic data releases; neither being mutually exclusive. As investors have come to see through the shock of the more immediate and heavy knock to earnings, share prices have risen and valuations have thus rebounded.

At these higher levels markets will be very sensitive to any news which challenges the increasing consensus view of a V-shaped recovery from coronavirus. Another key point to discuss is the portfolio role of government bonds, which have historically benefitted multi-asset investors when equities have fallen sharply.

However, with yields so low currently, lending money to the US government will grant a measly 0.7% per year if you hold the benchmark ten-year bond until maturity, it is hard to see government bonds providing as much protection as they have done in the past unless investors believe bond yields could move significantly negative.