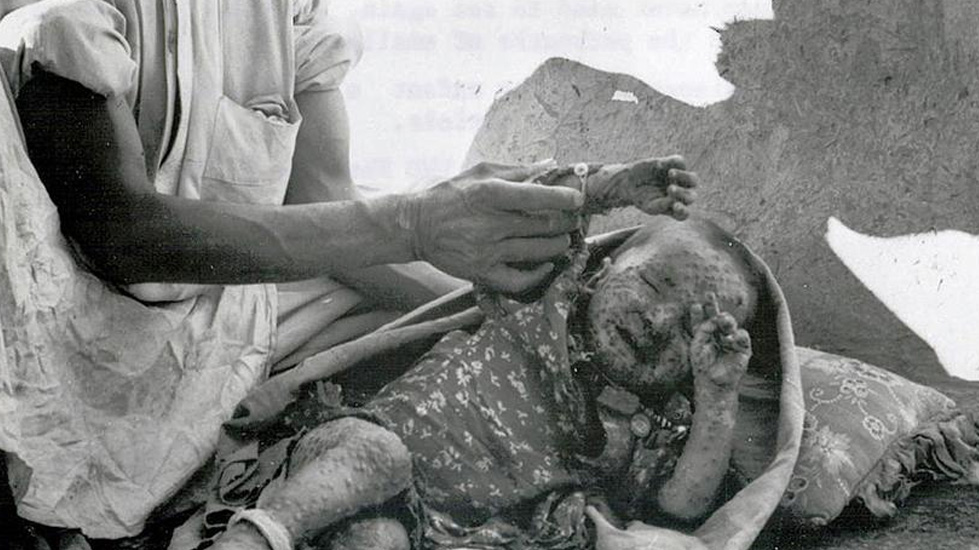 The eradication “stands as the greatest public health triumph in history”, said World Health Organization (WHO) chief, Tedros Adhanom Ghebreyesus, at a virtual event, adding that “there are many lessons to learn” from the scientific achievement “that can help fight COVID-19 and prepare for future pandemics”.

Many of the basic public health tools that were used successfully to combat smallpox are the same ones that have been deployed to respond to Ebola and COVID-19, namely, disease surveillance, case finding, contact tracing, and mass communication campaigns to inform affected populations.

“The smallpox eradication campaign had one crucial tool that we don’t have for COVID-19 yet”, said Mr. Ghebreyesus, “a vaccine”.

In fact, the smallpox inoculation was the world’s first vaccine, according to WHO. The virus was highly contagious, causing a fever and distinctive, progressive rash. Around three in 10 of those infected died, with survivors often bearing permanent scars, and some were left blind.

As the UN agency works determinedly with many partners to accelerate a COVID-19 vaccine to control transmission, the WHO chief pointed out that an inoculation “was not enough on its own” to end smallpox.

He recalled that while the vaccine was first developed over two centuries ago, in 1796, “it took another 184 years for smallpox to be eradicated”.

“The decisive factor in the victory over smallpox was global solidarity”, spelled out Mr. Ghebreyesus, noting that at the height of the Cold War, the Soviet Union and the United States “joined forces to conquer a common enemy”.

They recognized back then that viruses respect neither nations nor ideologies and according to the agency head, that same solidarity, which was built on national unity, is “needed now more than ever to defeat COVID-19”.

“Stories like the eradication of smallpox have incredible power to inspire”, he stated.

Noting that smallpox is “the first and only human disease eradicated on a global scale through the collaboration of countries worldwide”, the WHO chief said that it highlights “what is possible when nations come together to confront a common foe”.

And the legacy of smallpox provides confidence for the world to pursue the eradication of other life-threatening diseases, such as polio.

Like smallpox, COVID-19 is “a defining challenge for public health…a test of global solidarity”, Mr. Ghebreyesus asserted , adding that it also gives us “an opportunity not only to fight a single disease, but to change the trajectory of global health.”

It offers the chance to “build a healthier, safer, fairer world for everyone – to achieve universal health coverage, to achieve our dream from the establishment of WHO in the 1940s: Health for All”, he said.

As part of the celebration, WHO issued a smallpox commemorative postal stamp developed by the UN Postal Administration, to honour the millions of people who tirelessly worked together to eradicate the contagious, disfiguring disease.

“When WHO’s smallpox eradication campaign was launched in 1967, one of the ways countries raised awareness about smallpox was through postage stamps”, recalled with WHO chief, “when social media like Twitter and Facebook was not even on the horizon”.

“The world and all its peoples have won freedom from smallpox”, the World Health Assembly officially declared on 8 May 1980.

Until it was wiped out, for at least 3,000 years, the disfiguring and deadly disease had plagued humanity – and killed some 300 million people in the 20th century alone.

It was ended, thanks to a 10-year WHO-spearheaded global effort that involved thousands of health workers around the world to administer half a billion vaccinations to stamp out smallpox.

The $300 million price-tag to eradicate the virus has saved the world well over $1 billion every year since 1980.