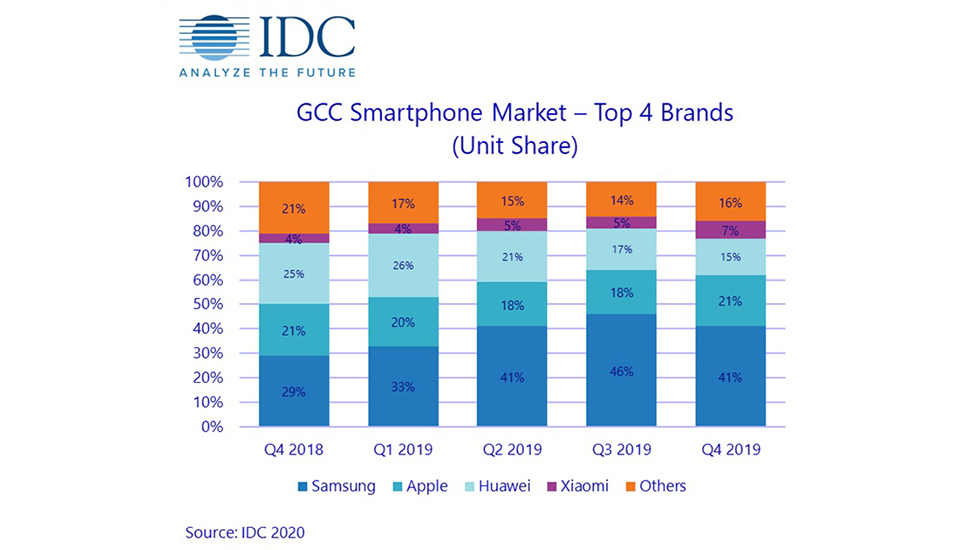 Smartphone shipments to the countries of the Gulf Cooperation Council, GCC, increased 6.3% quarter on quarter in Q4 2019 to total 5.15 million units, according to the latest insights from global technology research and consulting firm International Data Corporation, IDC. However, this was not enough to prevent a small 0.2% QoQ decline in the region’s overall mobile phone market, with feature phone shipments suffering a major decline of 18.1% to just 1.45 million units.

Samsung continued to dominate the GCC smartphone market in Q4 2019 with 40.6% unit share, although this was down 5.1 percentage points on the previous quarter. The contraction in Samsung’s unit share largely stemmed from supply chain shortages in the channel and the exceptionally strong performance of Apple and Xiaomi, which increased their shipments 22.6% and 51.4%, respectively.

“The shipment growth seen in some of the smaller GCC markets is a positive sign for the overall region, particularly as it comes after long periods of contraction,” says Akash Balachandran, Senior Analyst at IDC. “Previously, shipments had been constrained in these markets by the introduction new levies and taxes, shifting government policies, and challenging job conditions brought about by nationalisation programmes.”

“Demand for Apple’s newly released iPhone 11 series exceeded all previous market predictions,” says Ramazan Yavuz, Senior Research Manager at IDC. “Meanwhile, Xiaomi increased its share of the GCC smartphone market to 6.8% following the strong expansion of its distribution network and the successful release of popular models like the Note 8 that have been very well received by consumers.”

Shipments of Huawei devices to the region fell 1.7% QoQ in Q4 2019, with the vendor accounting for 15.7% share of the smartphone market, a significant decline from 24.3% in Q4 2018. “Given the challenges facing Huawei, the vendor performed exceptionally well in Q4 2019,” says Balachandran. “In particular, the annual Mega Sales event in Saudi Arabia helped bolster its overall numbers for the GCC. While Huawei is unlikely to make up much ground in the coming quarters, its impending launch of a new mobile OS and integration of its app store with its new releases is likely to cement its position as one of the top three vendors in the GCC.”

Looking ahead, vendors and channel partners are expected to release new form factors and increasingly push 5G devices to consumers over the coming year. Apple is slated to jump on the 5G bandwagon in late 2020, while Huawei will release the market’s third major mobile operating system, Harmony OS. The UAE’s Expo 2020 event will also be a major boon for players in the GCC mobile industry. However, the COVID-19 outbreak is likely to dampen mobile phone shipments over the course of the year, with IDC’s initial forecast of growth for the GCC market in 2020 being downgraded to a year-on-year decline of 1.4%.

“The COVID-19 outbreak has created a lot of uncertainty in the smartphone industry and has had a huge impact on the supply chain for mobile devices,” says Yavuz. “As a result, our growth forecast for the GCC’s smartphone market has been revised downwards. After analysing various factors and considering multiple recovery scenarios, IDC is currently implementing the most probable scenario analysis and expecting a recovery in the overall situation by the second half of the year. Having said that, the next few weeks will be crucial in determining the trajectory of the virus, and IDC will be monitoring the situation closely.”