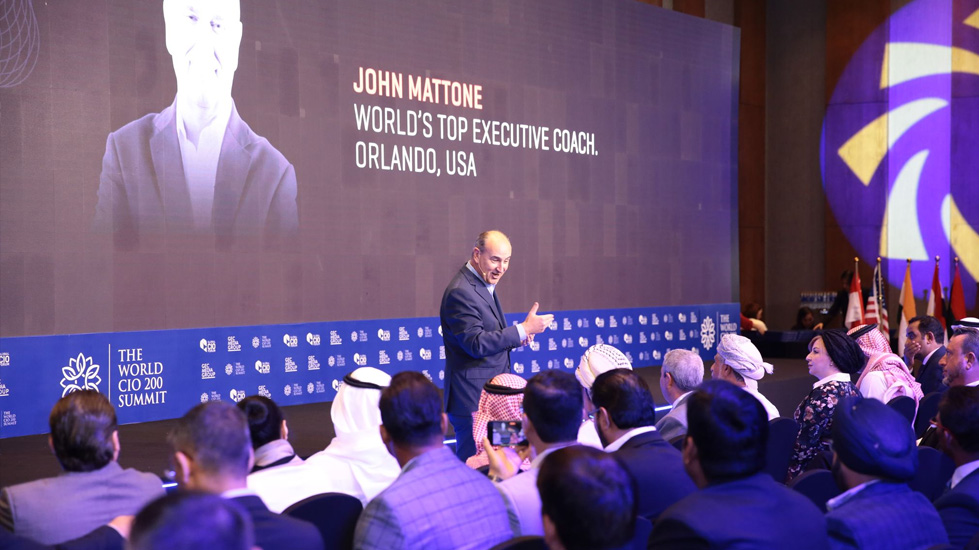 The delegates of The World CIO 200 Summit were transported to a different aura as they witnessed some never-seen-before speaking sessions in any technology event. The three key pillars or themes of the event – HX, BX and TX— brought together some world class speakers who presented thought-provoking cases on what modern business leadership is all about and how the human factor should be rekindled to win the modern marketplace.

The insightful speakers of the event were;

The highlights of the event were John Mattone and Arunachalam Muruganatham, who moved the audience to tears with their life stories and inspiring experiences.

John is the #1 authority on Intelligent Leadership & widely recognized as the world’s top executive coach. John Mattone is the author of nine books including four best-sellers. His most recent bestseller, The Intelligent Leader: Unlocking the 7 Secrets to Leading Others and Leaving Your Legacy, was named by BookAuthority.org (the world’s leading site for nonfiction book recommendations), as the #1 new leadership book of 2019 and top 50 leadership book of all time. In addition to his busy schedule coaching the world’s top CEO’s, government leaders and athletes, John has personally certified over 450 global executive coaches from 52 countries in his proprietary Intelligent Leadership Executive Coaching Philosophy and Process. John serves on the Executive MBA Faculty at Florida Atlantic University and he is a Distinguished Senior Fellow of the Hult International School of Business, one of the world’s top-ranked business schools. Always wanting to pay it forward, John created an endowed scholarship, the John Mattone Graduate Scholarship for Coaching and Leadership at the University of Central Florida—his graduate school alma mater, which is awarded annually to a deserving graduate student in Industrial/Organizational Psychology. John is regularly featured in the Wall Street Journal, Fast Company, Fortune Magazine, The CEO Magazine, and on television. Ladies and Gentlemen, John Mattone and his Company, John Mattone-Global are on a mission to change the world one leader, one coach at a time. Will you please join me in enthusiastically welcoming, John Mattone.

Arunachalam Muruganantham (Padman) is a social entrepreneur from Coimbatore in Tamil Nadu, India. He is the inventor of a low-cost sanitary pad-making machine and is credited for innovating grassroots mechanisms for generating awareness about traditional unhygienic practices around menstruation in rural India. His mini-machines, which can manufacture sanitary pads for less than a third of the cost of commercial pads, have been installed in 23 of the 29 states of India. He is currently planning to expand the production of these machines to 106 nations. In 2014, he was included in Time magazine’s list of 100 Most Influential People in the World. In 2016, he was awarded the Padma Shri by the Government of India.